HomePublicationsEmployeesWhat does the ratification of the minimum wage mean?

What does the ratification of the minimum wage mean?

Recently the Ministry of Labor and other adjacent organizations and labor groups met to ratify the minimum wage.

In Nicaragua, the Minimum Wage Law states that the minimum wage should be adjusted each year twice, once during the month of March and again in September. It also mentions the manner in which this should be done establishing protocols that need to be followed by the pertinent groups that form the commission in charge of negotiating and deciding on the amounts the minimum wage for each economic sector will increase.

Nonetheless, the current state of the economy and other factors has obligated the minimum wage commission in recent years to be flexible. In fact, for the year 2019 there was no increase to minimum wage throughout the entire year. 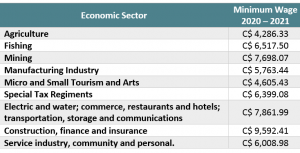 Therefore, for 2020 there would be no increase of the minimum wage in the month of September and the minimum wage commission that recently met to ratify the minimum wage was simply to formalize and keep in effect the agreement that was originally made at the beginning of the year.

We hope that this provides answers and clarifies any concerns as to why there is no additional increase in minimum wage for this month of September 2020.